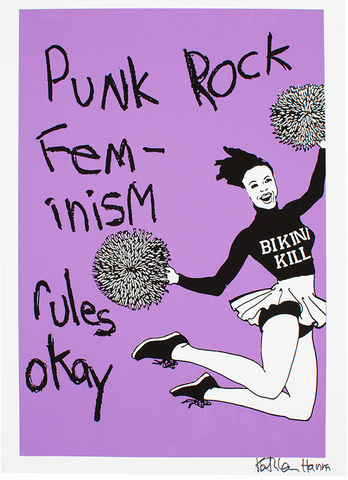 Riot grrls, from the isolated Pacific Northwest to the shores of the Atlantic and the prairies in between, catalyzed a cynical nation through confessional rants and powerful critiques of a system that objectified and perpetuated violence against them. Radical “third-wave” feminist theories on the body, race, sexuality, class, privilege, and gender were captured on xeroxed paper or pressed into 7″ vinyl records. The riot grrl culture was dynamic in disruption yet static in reflecting much of the status quo. It was a predominately female identified youth-led movement born from the simple premise that they had every right to be on stage, have opinions, and fully participate in their communities. It was radical accountability and influenced a generation of feminist thought and action.

That’s one version of riot grrl’s influence distilled from the dissonance of fractured underground cultures and personal experience.

The history of the riot grrl revolution, as evidenced by the considerable press surrounding the recent release of The Riot Grrl Collection and franchising of Bikini Kill’s fashion for sale, seems to have landed on the contentious opinion of whether or not riot grrl as a movement had any validity (as any classic punk argument is want to do). This current project of framing a specific time in U.S. history (approximately 1990-1997) within localized cultures and individual agents has produced a firestorm of commentary from those who participated or not. As is the case with most underground movements that have been pushed into the harsh above-ground light, a major sticking point revolves around authenticity.

It is revolutionary practice for individuals in a community to openly question, and more importantly vocalize, against constructed realities that do not represent them. The history of riot grrl is situated within the intersections of punk and DIY culture and their respective, mostly white, middle to upper class, straight and male, communities. It was riot grrl’s unique sound created by and for female-identified folks and a familiarity of independence and anger that seduced me the summer of 1996.

Riot grrl music and the subsequent theories that resulted were significant catalysts to my understanding the risks of practicing feminism.

Ultimately, riot grrls’ confessions of resistance were commodified into an exchangeable end product. It became more about the production and distribution of zines or albums which often required capital, both social and financial, than the politics of liberation. It was this narrow understanding of sharing that dominated the scene. Speaking only for myself, this commodification led me to question identifying as a riot grrl. When the message and actions moved from demanding to be heard to a watered down copy of itself to such a degree that the concept of “girl power” signified the Spice Girls, I moved forward as a free agent. I was not the only one who became disillusioned when the politics became a lifestyle.

The manifestation into consumable goods helps to explain the very valid critique that riot grrl was exclusive territory to those who were mostly white, upper to middle class, and straight. As a result, many believe that the narrator of this specific history is in fact that particular dominant voice. Who is being asked to provide testimony matters deeply. Who is asking the questions? What is being asked and, more importantly, not asked? Who’s voices are not being heard? Should it be a surprise that once again those same stories, and to some extent the music, are being commodified into an aesthetic to be consumed?

It is important to be conscious of the following factor: the fidelity of the narrator, and ultimately riot grrl’s comprehensive history, rests on the assumption that we should listen critically to those who were members of those communities. It’s also important to simultaneously remember that communities are messy as are the blissful memories of youth. Qualifying the impact of embodying radical thought that exposes privilege as oppression is a political act.

When we resist hearing only one point of view, one voice, we honor the original revolutionary tenets of riot grrl. There is power in knowing it is not a history that can easily be bought and sold.